Motorcycle accidents create some of the most devastating injuries that take place on California roadways. It isn’t uncommon for motorcycle crashes to result in serious injuries. In some particularly bad cases, it can even lead to wrongful death.

Many motorcycle crashes occur due to the negligence of other drivers on the road. When the driver of a motorized vehicle is engaged in negligent behaviors, such as driving recklessly or failing to abide by traffic laws, they are endangering everyone they’re sharing the road with—motorcyclists, bicyclists, pedestrians, and other drivers alike.

If you sustained a serious injury in a California motorcycle accident, working with an Elk Grove injury attorney can make an enormous difference in the outcome of your claim. When another party’s negligence has caused you to sustain broken bones or limbs, suffer a traumatic brain injury or spinal cord injury, or caused the death of a loved one, you need professional legal advice. If you’re in the Elk Grove, CA area, reach out to the Ward Firm for legal assistance with your motorcycle or any other motor vehicle accident.

Should I Get a Lawyer for a CA Motorcycle Accident Injury?

Those who were injured in a motorcycle accident should reach out to an Elk Grove injury attorney at their earliest convenience to ensure they receive all the damages they’re rightfully owed. Your California motorcycle accident attorney can help you throughout every stage of the claims process. This includes negotiating with insurance providers, which can be difficult to do if you’re not familiar with the procedures. Don’t forget that the objective of insurance companies is to make the greatest possible profit, even if achieving this goal harms your ability to receive the compensation you’re owed. 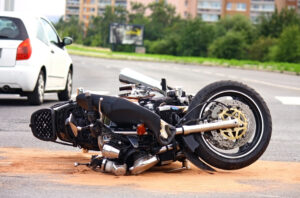 If you try negotiating with an insurance provider without the aid of a lawyer, it could negatively impact the strength of your claim. It’s surprisingly easy to make remarks that your insurance company can interpret as an admission of fault, regardless of this is how you intended them to be understood. An experienced motorcycle accident attorney, however, understands how to speak with insurance providers in a way that doesn’t compromise your claim.

Without the professional legal support of an injury attorney, it is also difficult to know whether you’re receiving all the damages you’re owed. After you’ve received a settlement offer, for instance, your lawyer will be there to inform you of whether it’s actually fair.

In addition, your CA motorcycle accident attorney will also perform a thorough investigation of the crash. This investigation can lead to the retrieval of essential evidence to your claim, which can then be used to prove other factors that may have contributed to the accident. It could be the other driver’s fault, but it could also be a road hazard or missing signage. Your attorney understands what information or evidence to look for to determine who was at fault and, thus, who will be receiving damages for their losses. If you were in a motorcycle crash on the California roadways, your next step (after receiving medical treatment) is to contact the Ward Firm for legal aid.

The Importance of Liability for an Elk Grove Motorcycle Accident Claim

When an insurance provider or court is determining who will receive damages during a motorcycle crash claim, they first need to determine who was liable for the accident. To determine liability during a personal injury claim, you will need to prove that the other party was acting negligently. You will also need to demonstrate that it is this negligence that led to you sustaining a serious injury. This is the only way to show that the other driver was at fault and that you should receive damages for the losses you’ve suffered.

The state of California uses a pure comparative negligence law to determine who is at fault during a personal injury incident. This means that if an individual was partially at fault for the motorcycle accident, they will still be eligible to collect damages. However, the damages they receive will be dependent upon what percentage of responsibility they had in the crash.

The court will determine how much fault each party holds in the accident, which will be represented through a particular percentage. For example, it is possible for the victim in a motorcycle accident to be deemed 20% at fault for the crash if the other driver can prove that the cyclist was engaging in some form of negligent behavior on the road—even if that negligence wasn’t as egregious as the other driver’s.

In the aforementioned example, if the motorcyclist had been eligible to receive a maximum of $100,000 in damages for being 0% at fault, this max compensation will be reduced based on their partial fault in the crash. If they were 20% liable, then the maximum settlement they can receive will be reduced by that same percentage, making them eligible for just $80,000 in damages.

This means that even if you are partly at fault for the incident, you may still receive compensation for medical bills, prescription costs, and even pain and suffering. To learn more about your options after a CA motorcycle crash, contact our firm.

Who Is at Fault in Most Motorcycle Accidents?

It’s common for motorcycle accidents to occur due to the negligence of a motor vehicle driver. There are many kinds of negligent actions or behaviors that can endanger motorcyclists on California roadways. Sadly, many drivers don’t look out for motorcycles as they should, causing serious injury to cyclists.

Should a crash occur, the car’s driver is rarely the one to sustain the most serious injuries; it is almost always the motorcycle rider who suffers the brunt of the consequences, regardless of whether they were at fault. Even with helmets and skin guards, cyclists simply don’t have the protections that those driving cars and trucks have.

Some common examples of negligence by motor vehicle drivers on the road are:

All these negligent actions can lead to a serious crash with a motorcyclist, often leaving the motorcycle’s rider with severe or even life-threatening injuries.

What Damages Can I Collect From a Motorcycle Crash Claim?

Those who were injured in a motorcycle crash are often eligible for a wide variety of damages, depending upon the severity and details of their accident. These damages can be either economic or noneconomic in nature. Economic damages are given based on the financial losses of the victim and can typically be proven to a court through documents such as medical bills, prescription drug receipts, and documentation for loss of work. Alternatively, noneconomic damages don’t have a literal price tag associated with them and can be more complex to prove to a judge—especially if you’re not working with a personal injury attorney.

There are several kinds of economic damages that can be given out during a motorcycle accident claim. Of few of the most common are:

It is possible for motorcycle crash victims to collect both economic and noneconomic damages, even during the same claim. Noneconomic damages can also vary depending upon the individual’s unique losses, although they can include:

Without a personal injury attorney, it can be a struggle to put an accurate price tag on noneconomic damages. Your motorcycle accident lawyer can ensure that you aren’t missing out on any noneconomic damages that you’re rightfully owed as a part of your settlement.

Motorcycling can be a fun and exciting way to travel along California’s highways, but it does come with some risks. Some examples of common motorcycle accident injuries are:

Talk to a Motorcycle Accident Attorney in Elk Grove and Sacramento, CA

If the negligence of another driver has led to you being seriously injured in a motorcycle crash, then you shouldn’t be responsible for your losses, including the medical bills you incur. The best way to ensure that you receive a fair settlement is through getting in touch with a local Elk Grove motorcycle accident lawyer at the Ward Firm.

To schedule a consultation with the Ward Firm, simply give our office a call or fill out the contact form on our website.

At your free initial consultation, you will meet directly with Justin, and he will explain how he can best help you with your case. If you decide to work with us, we will immediately get started on creating a strategy that protects your interests.

To get more information, call our office at 916-443-2474 or send us an email using our contact form. We are available by phone 24 hours a day. Se habla español.

The Ward Firm is open and actively assisting clients with personal injury, criminal, and employment related matters, and we do not anticipate any interruption in representation. However, please understand that all appointments will be telephonic as we observe the CDC's recommended social distancing.